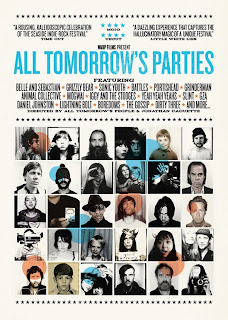 Battles, Belle & Sebastian, Dirty Three, Grinderman, Octopus Project, The Gossip, Animal Collective, Saul Williams, Daniel Johnson, Yeah Yeah Yeahs, Mogwai, Hawk & A Hacksaw, David Cross, Iggy & The Stooges, The Boredoms, Fuck Buttons, Sonic Youth, Akron/Family, Mars Volta, Portishead, Les Savy Fav, Patty Smith, and Grizzly Bear
Sounds like a newbie Indie kid's Amazon wishlist, instead these are the artists that populate ALL TOMORROW'S PARTIES. This suedo-documentary is great in its conception, but fails to give us enough of each band or a straightforward plotline (though one is never needed in a music film). It is conceived from fan footage/found footage during different Holiday Camps sponsored by various musicians. I don't ask a lot from music docs, except for music and in this area it delivers almost too much. Each band gets less then two minutes of face time, so it plays like a guessing game. While the inbetween footage is fun and homages Woodstock in its use of split screen, these 'kids' that the film is somehow about come across more as hipsters than lovers of the music/movement. Their documented debauchery and all too hip clothing seem more like artifacts of a culture trying to create themselves in the eyes of the past rather than forming the titular - "future party." What truly bothered me were the shots of drunken Neanderthal behavior that seemed to convey a mixed message - douchebags listen to great indie music?
Putting aside this infectious idea of a counter-culture that buys its image to look counter-cultural, and spoiled children with the ability to go on holiday to spend the week with their favorite bands - and not have to worry about WORK or BILLS, lets look at the positive message embedded in this film. The new DIY generation with all of its toys and abilities to create can form a revolution in the music industry - independent artists that could never be heard before are becoming the forerunners of a new music industry. This new electronic/throwback/sweet/rock/metal is setting new standards for the future of music, so even with douchebags and hipsters listening to it the perpetuating effects of a DIY culture is the positive that prevails.
Check it out for the music - not the short bits between acts.
Rating: IV/V
Akron/Family Animal Collective Battles Belle Sebastian Daniel Johnson David Cross Fuck Buttons Gossip Grizzly Bear Iggy Les Savy Fav Mars Volta Mogwai Patty Smith Portishead Sonic Youth