The Burning - A long thank you 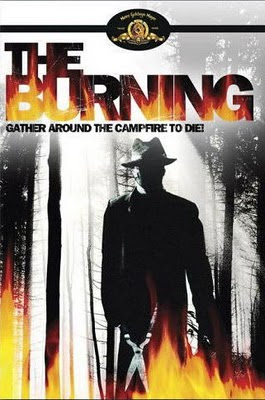 After the anger receded from the horrible viewing of He Knows You're Alone, we had to go back to an overlooked classic: The Burning

.  It did the trick.  Again this is another slasher from the mold of Halloween, but this one definitely has more of a Friday The 13th feeling - it's another summer camp slasher film.  Released in 1981 along with:
Bloody Birthday

,
Happy Birthday To Me

,
House By The Cemetary

It's easy to see why this wasn't the blockbuster success it may have been.  There are a lot of hidden gems here, we get a script by Bob and Harvey Weinstein, Jason Alexander's first role, a young gangly Fisher Stevens (Hackers

), a brief Holly Hunter, music by Rick Wakeman of Yes, and the always impressive Tom Savini creating some of his greatest effects.  It seems as though the only one that didn't go on to greatness was the films director Tony Maylam.  With the films re-release a few years ago a cult following was finally borne, but this is still an incredible gem to behold on your way to becoming a slasher film aficionado.

, but don't let his name fool you.  He is a burn victim with only revenge on his mind - huh, kinda predates a certain other villain with a much cooler name.  He is Cropsy.  Let that sink in.  According to folklore, a killer by the name of Cropsey has terrorized summer camps in upstate New York since 1977.  Our Cropsy on the other hand was a summer camp caretaker that wasn't liked by the kids. But, since we never hear his side of the story we maintain that the prank that lead to his 'burning,' wasn't in the least warranted.  Maybe we have sympathy for him since one of the fathers here at CineNiche is actually a camp grounds caretaker.  Nevertheless, Cropsy is a victim.

The terrible teenagers of Camp Blackfoot decide to teach him a lesson one night in the form of a prank.  From the looks of the shack that Cropsy lives in, he's underpaid and with hard liquor strewn about the room his life decisions have taken their toll on him.  Just because he drowns his sorrows and keeps an unfulfilling job doesn't warrant what comes next.  The teens have garnished a human skull with maggots worms and candles to frighten him, but the question we have is where did they get that skull?  In reading others impressions of this film they state it's a fake skull - which in reality it is but in the film is it supposed to be real or fake?  It looks real, so it just shows these kids are psychopaths.  They place the disgusting skull on his makeshift nightstand, light the candles, and wake him up.  Scared to pieces he knocks the thing on to his alcohol soaked bedsheets and in trying to get out from under them a random gas can ignites and he's engulfed by flames.  He gets out of his shack screaming in agony, well the stunt double with the huge padded suit gets out and the ADR gives us his shriek, and falls into the lake.  This is our preamble to the horrors ahead as all Slasher films seal themselves to in one way or another.

We are given a voice over explanation of Cropsy's condition while in the hospital saying the skin grafting didn't work, lucky to be alive, shouldn't blame anyone speech and then he's released.  This is years later and his hatred has only grown.  Once out of the hospital he visits a working woman, which is understandable, and when she can't even accept his now grotesque face he returns to camp.  Now maybe his fate would have been different if the whore would have accepted him, probably not, but something to think about. 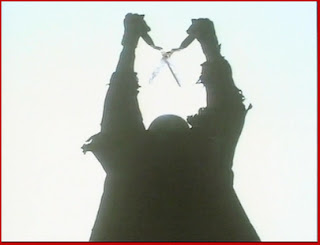 While in Cropsy's POV phase of watching the new campers he realizes the same mischievous behavior occurring and he is committed to his revenge.  The campers are all stereotyped dorks and jocks, but not as shallow or wooden as they are in other summer camp films.  Jason Alexander get a lot of good dorky jokes in, the kids are bullied by Glazer (Larry Joshua of Fast Times At Ridgemont High

), and their hormones force them into perverted peeping toms but not as bad as the teens in Porky's

.  The kids except for Glazer and the counselor that helped in Cropsy's torment, don't deserve to be killed.  Most of them don't get laid and some are even pre-hormonal.

This leads us to the all-bets-are-off murders that ensue.  There is no rhyme or reason to the kids he impales with garden sheers - he is blind vengeance and served ice cold.  The best kill scene is reserved for late in the game and we're going to spoil it for you.  The old adage of safety in numbers is destroyed, when Cropsy springs up from a canoe and kills five campers at once in one of the best slasher scenes of the eighties.

You will never guess how they kill the burn victim - they burn him again, and actually it is the counselor responsible for his vendetta that sets him on fire the second time.  This is wrong on so many levels, and while the Weinstiens probably weren't shooting for something so bleak, they achieved it through context.  We would like to thank this forgotten celluloid for all its hard work and ability to rip-off Jason Vorhees while still creating something original and timeless, we apprechiate it.