Showing posts from August, 2010
Show all

Werner Herzog What Have Ye Done? 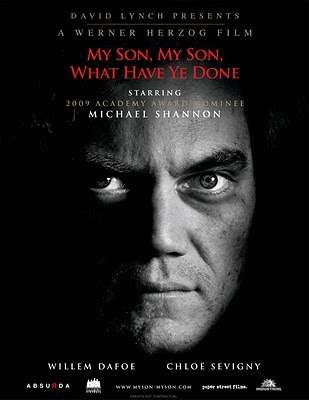 We heard the same buzz as everyone else: David Lynch and Werner Herzog teaming up for the first time to create a film based on the true events of a son killing his mother with a sword.  Then when the cast was selected we grew even more excited: Michael Shannon as the sword wielding son, Chloe Sevigny as the girlfriend, Udo Kier as an acting instructor, Willem Dafoe as a detective sorting out the facts, Brad Dourif as a hate filled ostrich farmer, and Grace Zabriskie as the mother.  What could stand in the way of this film’s greatness?  Well apparently slow plotting without meaning and pregnant with nonsensical surrealism can be quite a drag.
Being a Herzog fan it comes as a surprise to see that My Son, My Son, What Have Ye Done? is so poorly constructed and executed, but in perspective it does feel like a stepping stone towards a new Herzog era.  He is no stranger in the land of surrealism, just one look at Even Dwarfs Started Small and it is apparent that randomness has its place in h…
Post a Comment
Read more
More posts