Carrie Teaches Us Menstruation Horror Is No Laughing Matter 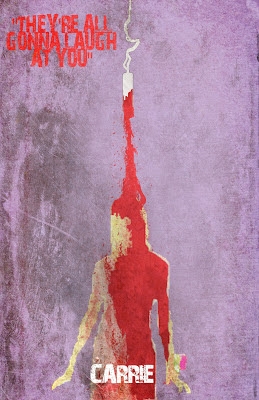 Brian De Palma's Carrie represents a first in menstruation horror.  This packed phrasing simply means Carrie shows the fears of adolescence through the eyes of a sheltered girl on the verge of womanhood.  The opening sequence features Carrie's first period and through extreme repression at home Carrie has no idea what is happening to her.  All the other girls laugh and throw tampons and pads at her.  In her state of frenzy Carrie has smeared her blood everywhere.  Miss Collins, her gym teacher, comforts her while secretly wanting to laugh as well.  In the principle's office she describes the situation to him and when he sees the blood on Miss Collins he recoils.  Carrie's anger and frustration manifests itself through telekinesis.

One could argue that her ability develops out of repression. Without a healthy outlet for her feelings or knowledge of her body, everything bottles up inside until her ability forces its way out.  Carrie's mother is a religious zealot and believes her daughter's bleeding has arrived due to sinful thoughts.  She locks Carrie in the pantry to pray, instead of telling her about puberty.  It's only after Carrie's mind rebels and lashes out that her mother explains adolescence.  Puberty and rebellion go hand in hand. However, in Carrie's case both are made more extreme by the oppression and suffering she's had to endure.

Sue Snell's motives are never made clear. She feels bad for the taunting, and out of guilt she would like to help Carrie fit in.  This altruistic guilt may be true.  An early encounter with Ms. White at the Snell house tells us that Sue is aware of the insanity that has raised Carrie.  Sue's plan is to get Carrie to go to the prom with her own boyfriend, so she can experience at least one night of high school normalcy.  Unfortunately another plan is underway to embarrass Carrie in front of the entire school.  When both plans merge, Carrie hits her breaking point.

The insanity of her mother, her repressed adolescence, and the presence of her first telekinetic catalyst (blood) sets off a chain reaction that destroys the school and everyone inside.  At home, Ms. White has decided to kill the demon she believes her daughter has become.  Through another biblical rant about sin, she offers a convoluted admission of guilt for creating Carrie.  Ms. White believes Carrie is a monster or the devil because she herself gave into sin. Unfortunately she dies believing this rather than the truth...Carrie is "the devil" because a religious lunatic raised her.

De Palma created the film with an oneric quality. The images are a bit washed out, and everything looks a little too bright overall.  That is until we see Carrie's home. Here, everything is dim and full of contrast, as if to juxtapose the life Carrie could have had with the one she is doomed to suffer.  De Palma gives us glimpses of Carrie's power to provide a slow build. When she unleashes her wrath, he uses a fast paced editing style along with split screens and lens filters.  De Palma knows how to use split screen effectively; this came from trial and error during the production of his masterpiece Phantom Of The Paradise.  Overall, Carrie will stand the test of time, and with an inferior sequel and made-for-TV remake, it has proven to be a timeless story of female adolescence and repression.

We look forward to Chloe Grace Moretz as Carrie this year, and while she's a great young actress, can she fill the homemade prom dress Sissy Spacek wore so perfectly?