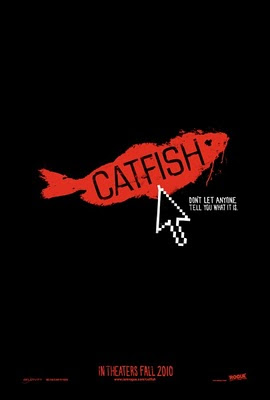 is problematic in several ways.  We could provide spoilers and dive into the plotline, but since most people haven’t seen the film yet, we would ruin the experience.  Another potential problem of a review would be jading your preconceived notions about the film itself and therefore again ruining the experience.   So in this difficult position we would like to briefly discuss the hype machine of this film.
Countless interviews have been done with Henry Joost & Ariel Schulman that all describe the authenticity of the film.  In an early showing Morgan Spurlock (Super Size Me

) told the two that their film was the best mockumentary he’d ever seen.  Henry & Ariel’s response to allegations that their film is a hoax add more intrigue to the hype machine: we could have never imagined the direction this film went.  The biggest problem is the gimmick of the trailer or it is the film’s saving grace, we can’t tell.  In the trailer references to Hitchcock

are tossed around without regard, and the mystery surrounding what the filmmakers find on their journey to the truth seems like something taken straight from Texas Chainsaw Massacre

.
The investigation into Nev (our leading man and brother of Ariel) and his relationship with an eight year old painter and budding romance with her sister takes the viewer on a tense trip to find answers.  Had the trailer not suggested a horrific discovery would the film remain as intense?  The shocking discoveries in this film are presented in a new docu-noir fashion.  Are people who they say they are?  We want to know as much as everyone involved with the film and this is what gives Catfish its power.  As the makers find clues to piece together, so does the audience.  We are witness to a mystery being solved and each step of the way brings us closer to a resolution.  The editing of this film is very amateurish, which also helps to build a connection with the transpiring events.  Had this film maintained a professional editing style the kinetic pace would have been lost.  Scenes are longer than they should be, there are lingering shots, sometimes muffled dialogue, and some abrupt cuts.  The reality of this film is not a question.  The makers do not die in the end.  This is no Blair Witch Project

and there is no elaborate hoax.  What we see is real.
Knowing the end the film does not take away from the masterpiece that Catfish is.  Made with the help of social networking sites, youtube, and google maps as resources and no script, this is an absolute gem.  This was not the horror film we set out to see, but nonetheless held us captive and filled with tension.
Rating: IV/V
catfish documentary gem greatest horror internet mockumentary youtube