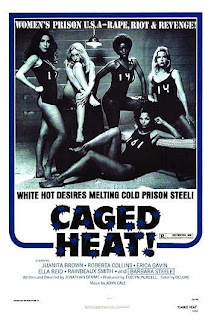 From the mind of the prolific director behind films such as Crazy Mama (1975), Fighting Mad (1976), and Handle With Care (1977) comes his directorial debut Caged Heat.
Jonathan Demme is also known for little films like Silence Of The Lambs (1991) and Philadelphia (1993) but in 1974 he was enrolled in the class of Roger Corman. Corman talks about the system he used for his directors as a list where you work hard as a grip, cinematographer, actor, misc. until it is your turn to get your own film. With Caged Heat came Demme's chance to direct, and what comes out of it is a normal Corman film - filled with violence, gratuitous nudity, sexual repression, rebellion, and torture. While these elements are in all Women-in-prison films, Demme seems to be able to create character development while sticking to the formula.
After a fast, cut to the chase style opening - crime, caught, sentenced - we are along for the ride to Jacquelin Wilson's first day in Hoosegow. She learns quick that these women are not to be messed with. They are all hardened criminals looking at life sentences. She ends up getting on Maggie's (our main badass) hurt list on the first day. Jackie is no innocent girl herself, she's led a life filled with crime without relationships. So what we get after an exploitative scene of a doctor 'checking' for narcotics is an ego vs. ego show within the prison walls. Demme fills the film with fun edits, like a star wipe or enlarged dots to the next shot to keep a light tone. Caged Heat deals with a few dark themes such as the resident doctors obsession with prisoners and his subsequent drugging and raping of them and a hard edged Barbara Steele (McQueen) as the wheelchair bound warden whose sexual repression leads to tougher treatment of the ladies. In the end its difficult to tell if the women's rebellion, rioting, escaping is justified by their mistreatment in the prison walls. These women are here for being a menace to society and normally in films about escaping the penitentiary, the characters we follow are normally innocent. So, it makes this one hard to care about their escape.
It is interesting that their are actually two escapes in the film - the first is Jackie and Maggie have teamed up and break free and the second is the empathic Jackie feeling sorry for the girls left in the slammer and devising a plan to break them out too. We get twice the action for the same price. In the end we see a wonderful slo-mo death sequence for our true villain - the doctor, but all the other casualties to get there seem wrong. Mcqueen is not villainous, just ignorant to the wrong-doings being committed by doctor perversion and is appalled when she sees the Polaroid he's taken. So, as viewers we are living vicariously through the women who escape then break back in to free their fellow inmates and kill anyone that gets in their way and eventually escape again. Pandora, Belle, Crazy, Jackie, and Maggie are our anti-heroes but there's nothing significant enough about them to make us root for them.
RATING: II/V Did I mention there's an exploiting shower scene that frames only breasts for about a two minute duration. Another note, John Cale of The Velvet Underground did the score for this film - which is rather unimpressive but nevertheless a worthy note.
women in prison