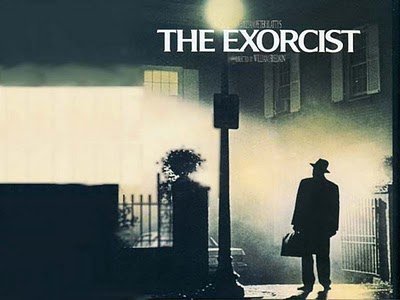 describes the undercurrent in William Friedkin’s The Exorcist

by writing, “In an era of recession, oil embargoes, the debilitating effects of Vietnam, and crisis of confidence in presidential leadership, cinema provides an ideological answer by invoking a traditional enemy - Satan (107).”  Everything terrible that occurs in our lives, by Christian standards is the work of the devil.  It is never the work of humankind, we could never be that horrible, it must be the devil working through us.  Human’s represent a duality between good and evil, if we can recognize something to be good or an action that we have to be right than we must have known wrong or evil within our lives.  We are light and dark, we are the shadow and the ego, we are the id and the superego, we are heaven and hell, yet we cannot admit to this.
The Exorcist can be interpreted as a lashing out on the family structure.  Ragan played by Linda Blair has no father and an actress mother who is sleeping with a crude film director.  Ragan is being raised by a mother who is never there, physically and emotionally.  This causes problems within every teenager.  To some extent Ragan’s actions are validated by the fact that she lacks attention and does whatever she can to receive it.  Ragan makes a spectacle of herself while her mother is entertaining, which any kid would do, when they feel the lack of a loving parent.  The Exorcist works socially as a wake up call to parents who put their careers ahead of their family, put into any other context and this film could be considered a family drama.  Instead of being possessed by the Pazuzu demon, Ragan is possessed with teen angst.  It is realistic in this respect.  Even when she is possessed, she still reflects her reality before the demon entered her.  Ragan resents her mother’s relationship with director Burk Dennings played by Jack McGowran.  Burk is a foul-mouthed, crude, and perverted, which Ragan later emulates when she rotates her head.  She speaks in Burk’s voice, showing her resentment and her influence from her mother’s lover.  Ragan has no outlet for her rage and inner chaos, but it manifests itself in the form of a demon.  The Pazuzu demon doesn’t possess Ragan, her id does.  “The seemingly endless variations on terror we can imagine for ourselves all spring from a common source: the mind that seeks metaphoric outlets for its imploding anxieties, the mind that must give symbolic form to repressed desires that would destroy its rational adjustment to society, the mind of lightness and darkness (American Horrors

:130).”  Especially the mind of a teenager, filled with not only the chaos that is developing into maturity, but also lacking the experience to understand anything fully.  Ragan is a normal teenage girl who lashes out against the atrocities that come from being raised by a successful single mother.  Without any role model or important figure in her life, she becomes possessed by her darkest desires.  “Most critics agree that the terrors confronting us in these films are neither gratuitous nor designed merely to effect catharsis; they also drive home lessons regarding our resolution of those personal and cultural problems that we are often reluctant to face outside the theater (115 American horrors).”  While this film hides behind the facade of being a possession film, it really addresses the issue of motherhood and what effects a single mother can have when she cares about herself more than her own children.
The theme of motherhood and relationships can also tie Ragan and Father Karras together.  Karras’ father died several years ago and he had an uneasy relationship with his aged mother.  Obviously this affects him a great deal, because the demon knows immediately it can use it against him.  Other factors pin father Karras as the next to be possessed, either by Pazuzu or by his own internal struggle.  His choice of becoming a priest and not more of a professional bothers him, and “as a celibate man he has repressed feelings of guilt, resentment and rage (Williams 107).”  Karras is also struggling with his faith, he is loosing his belief, causing a feeling of regret for his entire existence.  Within the context of the Pazuzu demon, Karras was fated to be possessed from the first visit with Ragan, when the demon says it’s a good day for an exorcism and explains how it may drive it out of Ragan but it will bring Karras and ‘it’ together.  This foreshadows the end of the film, when it is Karras’ time to be possessed.
“Monsters whether ’natural’ or synthetic... can be interpreted as dramatizations of our fear of our own ’double’ nature, the projecting upon another the terrors and desires we cannot enact outside the realm of art or dream (130 American Horrors).”  We can unleash all of our repressed memories and fears and desires within a film, the same way Ragan and Karras are possessed by them.  There can be a fear of something alien invading us and controlling our bodies like demons do, but we have internal demons every moment of the day that lay dormant until they cannot continue being repressed anymore.  Human beings have breakdowns all the time, when life has become too overwhelming and we just let go of all barriers, thus becoming possessed in a sense.  Karras wants to destroy all of his deep heartache, pain, and torment.  When it is released he sees his only option as destroying himself.  Karras commits suicide, for the greater good, to stop his own and anyone else’s torment.  This self-sacrifice is seen as Karras’ return to faith, but what I find to be a paradox here and maybe I don’t know enough about religion, but he commits suicide and within the Catholic church he is denied entrance into heaven, so even though he completely returns to his faith, he is denied access to his reward for devotion.  This could also be seen as even more of a sacrifice and if that is the case, one could only praise Father Karras.  The Exorcist shows how possession films are normally just a scapegoat for real societal problems such as abandonment, repression, angst, and guilt.