Where werewolves make us laugh: An American Werewolf In London

- July 28, 2011
Werewolves are wanderers like vampires, but they have the benefit of leading a normal life with the exception of three nights a month.  A werewolf is the release of our id.  The person transforms when the moon is full, the time of the month when oceans pull back and the polarity of the world is in flux.  The werewolf is our release, it is when all the troubles of life pile up and we can’t take it anymore and we let the wolf out.  It is the easy way out, instead of dealing with trouble and pain we just allow our darkness to take over all of our bodily functions.  The werewolf just kills everything in its way.  It is an animal; it is our animalistic-primordial state.  It is when we put ourselves on auto-pilot and allow ourselves to live only by instinct alone.  This can seem like a source of freedom, but it is also de-evolving.  We are a progressive species; we are the only animal whose brain grows before the skull does.  We need intelligence before we need protection.  So, it may seem like a werewolf is the power we have in ourselves, it is nothing more than reverting to a more primitive state or in a sense, regressing. 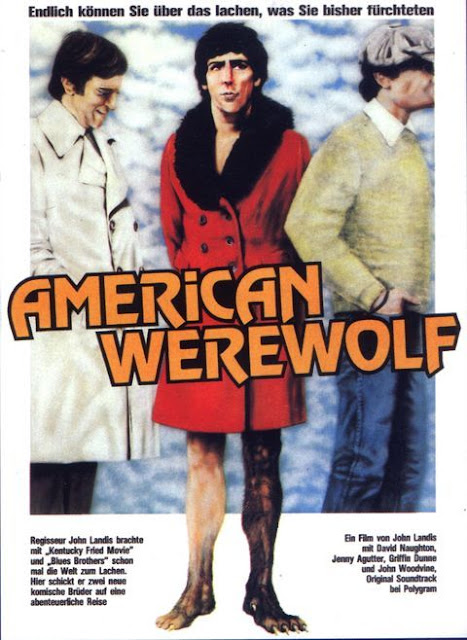 Werewolves have been a dying breed of monsters within the horror film until most recently with MTV's Teen Wolf or the terrible Jacob from the Twilight series.  To rephrase our former statement good werewolf films are few and far between.  Among the great films that depict lycanthropes John Landis’ An American Werewolf in London can be seen as a large landmark not only within werewolf lore, but in horror cinema as well.  Before Werewolf in London, films like this showed the transformation with jump cut dissolves, but after Werewolf in London horror films knew that to make a successful werewolf film, it is all in the transformation.  Rick Baker designed the special effects for Werewolf in London and recreated how we watch horror films.  Before Baker innovated techniques and won awards for his contributions to cinema, werewolves were created by overlapping dissolves and the addition of yak hair.  Rick Baker was among the three most talented minds within horror film special effects.  Baker, Rob Bottin and Stan Winston perfected make-up designs to incorporate a face elongating and becoming wolfish.  They showed us how humans contort and twist into lupine shapes and how canines grow into sharpened steel. In American Werewolf in London, David Naughton’s character, David Kessler falls to the floor of his apartment and his hand becomes elongated, he grows fangs, his back tightens, his nose and mouth stretch out, hair sprouts from his skin and he becomes a wolf.  This scene was the first to show full detail of a transformation.  The monster within us comes out.  David is an introvert who normally allows others to step all over him; you can tell his aggression has been bottled up, so you can logically see how anyone like this could erupt.  In David’s case the beast that comes out of him is powerful and ferocious, things that David could only wish to be in real life. 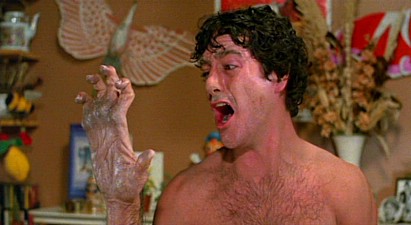 An American Werewolf in London set another new precedence in most horror films to follow.  The film showed in equal amounts that comedy and horror can work together.  It was not a spoof; it showed that realistic life is funny.  A sense of humor is all we have in some cases.  This provides a release of tension within a horror film.  Unlike exploitation and slasher films of the seventies that showed a build up of suspense with unrelenting force, An American Werewolf in London shows that it is okay to laugh in a horror film.  This blend of dark humor made the film successful, it wasn’t only a werewolf movie it was a self-reflexive horror film.  The film shows that werewolves are preposterous by nature, they are lore and legend, they are make-believe.  The audience gets into the plot, but they also know they are being entertained because it makes them laugh.  There is a scene at the end of the film where David goes to a porn theater (Landis always refers to the fictitious film See You Next Wednesday, here it is portrayed as a porno) and is confronted by his friend Jack Goodman (Griffin Dunne) who died the same night David was cursed.  His friend tells him that to free the souls of the people that David’s killed, David must die.  The souls of his victims are trapped in limbo until the last of the werewolf’s bloodline is severed.  His friend forces him to meet the people he viciously attacked.  There is a group of homeless men, a married couple, and another man who all tell David to commit suicide.  They give him ideas on how to ‘off’ himself, and the genuinely nice tone of the married couple telling him to “blow your brains out” is hysterical.  For me, my favorite moment of the film is the very end when David is gunned down and his girlfriend Jenny Agutter, stands over his naked corpse crying and the credits begin to roll with really upbeat music playing over them.  This juxtpositioning of music and context of the film cause an uneasy reaction within the viewer, it causes confusion.  It allows us to laugh, because normally when music is used in film it is non-digetic anyway.  The music comes out of nowhere and takes us out of the moment in the film, especially when the mood of the music doesn’t match the mood of the images.  The music takes us out of the film and places us back into the seats of the theater.  Werewolf in London works on many levels to engage the viewer, even to the point of laughter, one of the first films in the horror genre that tried to generate a large range of emotions, instead of just fear.
Rating: V/V
american werewolf horror comedy jacob john landis rick baker teen wolf twilight werewolf