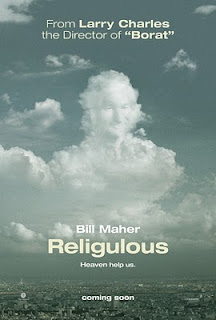 RELIGULOUS
Bill Maher, the stoned genius, creates a wonderful religious debate in his comic documentary directed by the controversial mind behind Borat, Larry Charles.
The biggest problem with this otherwise brilliant dissertation on the logic of religion is that the dogmatic masses who should see this film - won't. In fact they tried to ban it. Religulous preaches to the choir, in this case its agnostic/atheist choir.
The public whose immersed in their religious beliefs steer away from it and ignorantly label it as simple blasphemy. What makes this film brilliant is Maher's approach to the subject. No matter which faith monger he interviews, he remains level-headed without harshly attacking their beliefs. He's done his research here and the questions he posits only point out gaps or illogic of religion. Mostly he debates with evangelical Christians, but also Mormans and of course Scientologists. He is attempting through these interviews to fill in these gaps, but the questions he asks are never answered and the gaps remain.
Without answers for his questions Maher isn't moved or persuaded by any of his subjects to become faithful. His subjects, like the audience that would choose to condemn the film are also unpersuaded. This, of course, is the main issue: stubborn uneducated beliefs. He isn't trying to convert anyone, only pointing out flaws within an intangible set of ideologies - to which I'm sure if on his search for the answers he found irrefutable proof of God's existence, Maher would have bowed to any religion that provided him tangible faith. Does all of this mean the film doesn't matter in the end, if nothing is unchanged? No, because if you fit into the 16% that holds no religious belief, this can only make your argument stronger.
Rating: V/V
Fun Link: Celebrity Atheist List
agnostic atheist bill maher comedy debate documentary dvd god Mormon religion religulous review Scientology