Showing posts from May, 2010
Show all

- May 28, 2010
Our editor was just published on one of our favorite sites here at CineNiche: Only Good Movies.  Check out his interview there and give the site some love.

The Burning - A long thank you After the anger receded from the horrible viewing of He Knows You're Alone, we had to go back to an overlooked classic: The Burning.  It did the trick.  Again this is another slasher from the mold of Halloween, but this one definitely has more of a Friday The 13th feeling - it's another summer camp slasher film.  Released in 1981 along with:
Bloody Birthday,  Don't Go In The Woods,  Evil Dead,  Friday The 13th 2,  Funhouse,  Halloween 2,  Happy Birthday To Me,  Hell Night,  House By The Cemetary,  My Bloody Valentine The Prowler

It's easy to see why this wasn't the blockbuster success it may have been.  There are a lot of hidden gems here, we get a script by Bob and Harvey Weinstein, Jason Alexander's first role, a young gangly Fisher Stevens (Hackers and Super Mario Brothers), a brief Holly Hunter, music by Rick Wakeman of Yes, and the always impressive Tom Savini creating some of his greatest effects.  It seems as though the only one that didn't go on to greatness…
Post a Comment
Read more

He Knows You're Alone 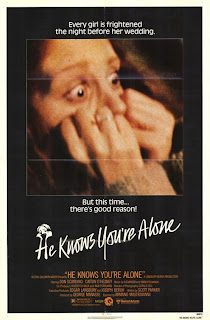 Or He Knows You're Copying.  Normally this would be unfair, because all of the slasher films of the eighties copied from the formula laid out very plainly by John Carpenter's Halloween.  Even Halloween was an homage to Italian Giallo films by Mario Bava and Dario Argento, but he took those somewhat complex plotlines and cut them down to the bare essentials.  Ironically enough, the slasher films that followed the wake of Halloween couldn't simplify enough and became more complex in trying to render a killer.

Lets put some slashers in order here, we'll start off at Halloween and work our way to He Knows You're Alone released in September of 1980.. 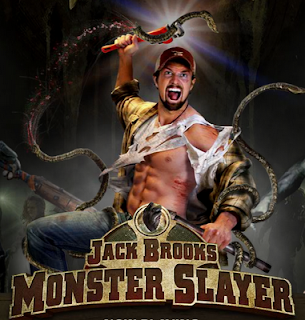 This may be the shortest review of any film on CineNiche, and it's out of spite.  Maybe not spite, but definitely to teach Jon Knautz a lesson.  We wanted to love Jack Brooks: Monster Slayer.  It had been sitting on the unwatched shelf for nine months, just waiting for that right moment to indulge in an Evil Dead type of horror comedy.  Finally, the day came - it was the right time - you know cosmos aligned and all that.  Final summation: This is the longest 85 minute film you will ever see.  It's not bad, far from it.  The main problem with Jack Brooks is they didn't have content to fill the running time so a lot of details that are not needed are included.  Here's a main example: Professor Gordon Crowly (Robert England) is possessed and ends up walking out his second story window and we cut to the next day.  Crowly wakes up with no clue how he got there and sees his hands are covered in dirt.  He turns around to see a hole that has started to be dug, so he continues…
Post a Comment
Read more 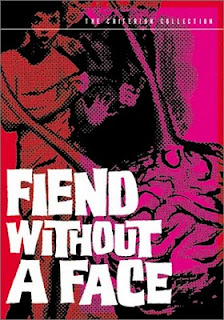 I've heard of some people that will only watch Criterion Collection films, which would brand them the ultimate in cinephile snobs - but little do they realize it harms their street cred because that would mean they hold films like Armeggedon and The Rock to be true cinematic classics as well. It doesn't matter what studio puts out a film, whether it's Janus or Lions Gate if it's good its good.  I will admit for some older classics I am a bit faster to track them down if they have the Criterion seal of approval, because overall they choose socially relevant films.

This leads us to Arthur Crabtree's 1958 SciFi classic Fiend Without A Face.  Here's a film with such an original premise and wonderful use of early gore that its hard to complain about a few wooden actors and monologue driven script.  These fiends, from the beginning are invisible creatures that attach themselves to you and suck out your brain and spinal cord.  We watch the actors struggle as if they …
Post a Comment
Read more 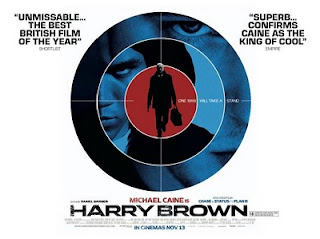 Watch Michael Cain as Paul Kersey in Death Wish VI: Pensioner’s Revenge.  The similarities between Harry Brown and Paul Kersey are endless: both have war time backgrounds and through the loss of someone close to them and no help from the police, decided to take the law into their own hands and become vigilantes for blood justice.  The biggest difference between Harry and all of the Death Wish films is that we care about him.  Charles Bronson couldn’t emote even if you slowly ripped every appendage from his body.  He made a career of being a masculine stoic.  If my wife was murdered, then a few years later my catatonic daughter and house keeper were raped beaten and murdered, and even later my best friend during the war was killed by a gang of thugs – I might shed a tear or two.
Harry is older than Paul was and suffers from emphysema.  He has lost his wife child and friend and he mourns – we watch this man break down.  He is all alone in a world that he no longer recognizes, and with …
Post a Comment
Read more
More posts