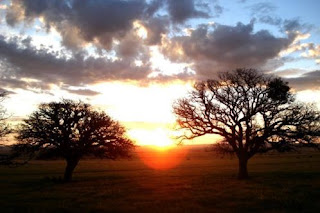 "Peace is stronger than love"
Carlos Reygadas creates a haunting meditation in his brilliantly nuanced Silent Light. This is not a film for the easily distracted, its transcendence is gradual yet from the beginning you know it is one that requires contemplation. You have to be in the right state of mind to gain pleasure from its artistry. It is slow moving and isn't conceived from a lot of action. The plot itself is easy to describe: A husband has fallen in love with another woman and as a result has placed himself in an existential crisis of what to do next.

The opening to Silent Light is a fantastic six minute transition from night to dawn through the use of slow - nearly invisible - dissolves, and it provides us the opportunity to learn how to watch the film by setting the tone perfectly. This contemplative pace continues to the end where day slowly gives way to night. Bookended by these transitions is a story of family, love, adultery, faith, and miracles. While the dialogue is sparse, each line has purpose and is delivered with a realism normally reserved for documentaries.
Reygadas taps into something new here, while filmed in Mexico, he actually used non-acting Mennonites - a culture never captured on film before. He shows us their devout spirituality, while also showcasing how unceremonious they are. As an example of this paradox: Johan - the husband - goes to his father, who is also a preacher, and asks for advice on his affair. The pious man relates to the son his own tale of near infidelity and ultimately tells Johan that no matter what is decided his mother and father will support him. We never see our characters at church and a funeral is comprised of singing hymns and paying respect. While Mennonites are a sect of Christianity, if they are as they seem in Silent Light then they are profoundly more spiritual.
The dramatic vein of the film is slit open in the last act and this action creates the ultimate faith-bound beauty and ambiguity that is deserved for such a gorgeous rumination on humanity. Reygadas ultimately paints this cinematic gem with broad strokes of light and in its closing moments the title seems a perfect fit. This is a must see for fans of Tarkovsky's slow moving beauty and lovers of Bergman's existential quest.
Rating V/V
adultery bergman cinema faith foreign light mennonite silent stellet licht tarkovsky